Well, here’s another nice mess I’ve gotten me into! 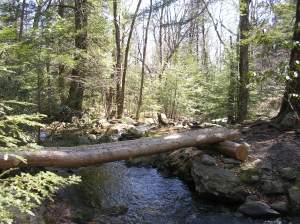 I don’t recall exactly how I got into it, but I am now heading to the Connecticut section of the Appalachian Trail with D2. (D2 is Daughter Two. There is a D1 and D3 also.) D2 has appeared in this blog before, as a weepy 5-year-old on a trail in Maine, and – much more self-confident at 14 – in Jasper National Park. We almost headed to the 52 miles of CT AT last year but, let’s be honest here, she chickened out.

A while ago, over supper – and possibly after a few beers – I asked if she wanted to reconsider. She did, and has held to the decision ever since despite my offering several opportunities for a graceful exit. I could probably do without the extra preparation work, not to mention a week away from my desk, but what father would not be delighted that a daughter between high school and university would agree to share the joys of the trail for four days?

And the miseries. I recently wrote in The Hour about a sunny day-hike on the AT. A reader commented that a long-distance AT hike would involve “too many trees and bugs” for her. And she is absolutely right. I have recently finished David Miller’s AWOL on the Appalachian Trail, which I hope to review in a separate post. Miller wrote in his diary, and he was in Connecticut at the time, “Doing this hike is too much hard work, too much pain, too much time away from my family, too many bugs, too much hot weather, too much cold weather, and too much rain.”

Now, D2 and I will hike but a fraction of Miller’s miles, but there will be hard work, pain, and bugs for sure, and probably heat and rain too. The last time I set out to do the CT AT – alone, improperly equipped, and 11 years more foolish than I am now – I gave up 15 miles short of my goal. That time, it was rain, pain and a thought along the lines of “why should I climb St. Johns Ledges and spend another night in a lean-to when I can just walk into Kent and be in my own bed in a few hours”. Wimp.

So D2 and I have a few weeks to sort out gear, including the Perfect Hiking Boot that I have not progressed with. D1, in the meantime, has made the point that this is a trial run for the long backpacking trip she signed up for a few weeks ago (see Planning and Imagining Hikes).