I was born in Glasgow, Scotland, when Eisenhower was in his last year as President, and the Berlin Wall was not yet built, never mind torn down. So, if it was not obvious from the photo, I am neither a spring chicken nor yet what Scots sometimes call a “wrinkly”.

I have roots on both sides of the Atlantic – old ones in Scotland, others in England where I grew up and went to university, and new ones sunk over the last 20 years in the US, where my daughters have mostly grown up. “Mostly” because we took the oldest to Venezuela when she was 10 months old, where middle daughter then joined her. We carted them both off to Brazil next. Our youngest was born in Norwalk just after the Millennium.

The travel was with Reuters. I worked for them in Japan too, where I met my wife, a Michigan girl. Before Japan it was Hong Kong.  For anyone interested, my career in information services – an ongoing career, I should add – is set out in my public LinkedIn Profile.

But this blog is about trails and escape, so I should explain a little about my hiking history:

When I was a child, my parents were not dedicated hikers exactly. But they peppered our vacations and weekends with walks, and some were serious enough. Of these, many that I remember well were on the Isle of Arran (right), where we vacationed at least three times in my first ten years.

Then there were walks on footpaths around our homes in England – rainy, before-Sunday-lunch affairs. They became longer in my teens, and solitary but for the collie-Labrador I was given around my 11th birthday. There were hikes out of muddy boy scout camps too, and a high school trip, enlivened with flirtation, in the Derbyshire hills.

Thereafter – and especially after my dog died – I effectively stopped hiking for two decades. I walked to get around the places I was in, and sometimes just for exercise. But I rarely hiked. (It was at this time though that I caught the bug, in Spain, for driving the backest of back roads.) 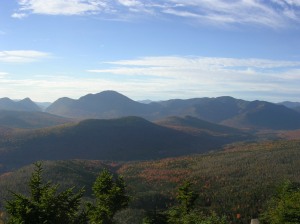 I will have to explain later why I got into hiking – even backpacking – in my 30s and 40s. First I will need to understand why myself. But I did – a few sorties while we were still in South America, and an ever-increasing enthusiasm once we settled in Connecticut. The books and maps on my shelf now are a catalog of the North American places I’ve been fortunate to explore – the Catskills; Acadia; the AT and White Mountains (left); the Adirondacks and Smokies; Baxter; the Gaspésie; the great parks of the Rockies and little-known state parks …

And then there is Scotland. The header photograph of this blog was taken at Bealach nam Fiann in Sutherland on Day Three of a 6-week north-south walk across the country 18 months ago. (See my pack by the ruined shieling?) Scotland played a big part in getting me into hiking, whetting the appetite on family vacations over a period of 15 years, taking my kids where I was taken. It was on a family walk during one of those vacations that the idea of walking all across Scotland came to me. It was the fine, breezy weather that must have clouded my judgment.

You can reach me at rcmcwill (at) yahoo (dot) com.

3 thoughts on “About Me”