I have written 12 “Taking a Hike” columns now. This is the 13th. But it’s the first about a point-to-point hike. All the others were loops. Loops are certainly convenient. There’s no need to “spot” a car or use public transport. But sometimes it’s nice not to divide a hike into out and back. And every Black Friday for many years I have taken this point-to-pointer. I am calling it the Turkey Burner, though really what it needs to burn is buttery mashed potatos, second servings of stuffing, and my wife’s perfect apple pie. It would be a very good Christmas dinner burner, too. The Turkey Burner nearly didn’t happen this year. My wife had better things to do than drive me to the trailhead. But Grammy – my mother-in-law – stepped forward to follow me to the Devil’s Den, where I’d spot my car, and then take me up to Jump Hill Preserve.

The Turkey Burner crosses three main tracts of land – the Aspetuck Land Trust’s Trout Brook Valley; the Centennial Watershed State Forest; and the Devil’s Den. It covers 10 miles of mostly easy terrain, but any of these preserves would be great for a shorter post-excess stretch, too (see “If you go”). Jump Hill Preserve is the northern part of Trout Brook Valley, and after Grammy dropped me off, I climbed its first ridge and was soon out of earshot of cars. The sky was cloudless; the air still but for a sporadic, weak breeze; the temperature just above freezing. The first mile and a half was all little ups and downs, the trail twisting and turning through the pale woods. I found a spotless maroon and white wooly hat on the ground and hung it on a branch. Then the trail came to the top of a ledge where trees grew aslant from boulders.

Down from the ledge, the trail became straighter and wider, descending gradually through leaf litter and rocks, both striped with tree shadows. The shadows were long now even at 11 a.m. At the end of this descent was a channeled stream fitted with a “fishway” to let the brook trout upstream to spawn, but none were using it today. Then I ran into an animated knot of walkers, and recognized faces from the Appalachian Mountain Club. I learned later that one of the group, on the way back, found his maroon and white headgear hanging in a tree. A little farther on, crossing Hawley’s Brook, the trees briefly gave way to a view – a gray wooded ridge under a sky that was bright still, but decorated now with gray-bottomed clouds. (Photo album on Facebook – “McWilliams Takes a Hike”, no sign-in.)

I walked next over little Pop Mountain, and made the only tricky descent of the day to Valley Forge Road. Here the Saugatuck River rushed and pooled in its bouldery gorge. A half-mile on asphalt brought me to the Saugatuck Valley Trail and the state forest. I’d met hunters here on previous Turkey Burners. Today, in a fit of prudence, I had rolled up my wife’s fluorescent orange poncho and strapped it to my pack. It was about the size of a raised deer tail. I couldn’t help but imagine a Far Side cartoon. In it I am lying on my back in the leaves, an arrow in my chest and a surprised look on my face. A way off, a hunter is scratching his head, and saying to his buddy “Say, Bob, you did say we were huntin’ orange-tails, didn’t ya?”

There were no hunters out today, and no walkers either on this trail. In fact, I’m not sure I’ve ever met another hiker here. Surprising, because it’s an attractive walk. Beyond Godfrey Road, I picked over a field of mossy boulders, made a short heart-pumping climb, and then sat on a long-fallen tree for lunch. The reservoir lay below, blue behind a dense screen of tangled timber. Later, rounding a bay, the wide band of bare soil and rock between trees and reservoir attested to a dry fall.

I was well over halfway now, well beyond where “out” would usually become “back.” But, as this was the Turkey Burner, point-to-point, I could keep going into the familiar Devil’s Den. I finished as the sinking sun was casting Godfrey Pond into dark shadow. Time to get home for more turkey. 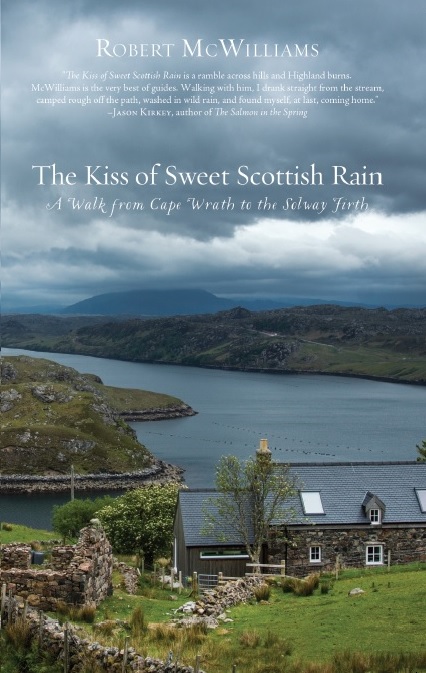