Even on the map, the trail from Fox Hollow to Panther Mountain looks like a marginal place. It doesn’t intersect with other trails, or run over a string of big-name peaks. Nor does it have a poetic title like the Devil’s Path across the valley. And New York’s “Long Path” from Fort Lee to near Albany ignores it on its 100-mile snake through the Catskills. Panther itself – at 3,730 feet – is just the 17th highest peak in the range, hardly a magnet. I think it was these Cinderella qualities that drew me to the trail, just a red line from a creek to a peak through green land that the map unequivocally calls “Wilderness”. (There is a photo album for this hike on Facebook: “McWilliams Takes a Hike”, “Day Hike Notes, Catskills – Panther Mountain”.)

There was nobody else at the trailhead in Fox Hollow. An unnamed creek tumbled from the mountains, its noise indistinguishable from the leaves rustling in the breeze. I loaded 6 pounds of iced water into my pack, and then sprayed the back of the pack with Off! This, I thought, would fend off mosquito bites between my shoulder blades – their favorite target. I set off up the wooded mountainside, and soon felt my heart pumping. The sun was splashing the forest floor and lighting up the foliage. Once or twice the breeze caught me, and briefly cooled my sweating skin. I felt a familiar, inevitable itch between my shoulder blades. Then, after an hour or so, the sun went in and I feared that thunderstorms might be building up. In the end, a minute-long shower fell, and so light that only the sound of its drops reached down through the canopy to me.

The grade had eased for a time, but now began to steepen again. It seemed too that the undergrowth was encroaching on the trail more and more, and rocks and roots taking over its surface. Then, among huge boulders, there was a break in the trees, and a view over an ocean of forest, the mountains rolling across it like tumultuous waves. A little farther up – certainly over 3,000 feet now – the deciduous trees became shorter and straggly, and the scent of pines filled the air. There was a bald up here. My Catskill Mountain Guide called it “a large, open rocky bald, from which many large peaks can be seen … ” But it looked small to me, and hemmed in by trees that hid the views. Maybe the writer hiked in the leafless seasons, or has our warming climate shrunk this bald in a few short years?

Certainly this was a woodland frontier; a short descent, and I was back in tall hardwoods and dimmed light. Ascend again, and the scent of pines returned. This was the long ridge of Panther now, where the trail takes a mile or more to climb 400 feet. Stacked up, moss-covered boulders the size of SUVs seemed to herald the summit, but beyond them there seemed always to be one more pile to deal with. Finally, the trail came to a ledge above a 1,000-foot drop. It had 180-degree views over the same hazy, green, roiling ocean; but still this was not the top. I had been on Panther before, and remembered a wooden sign nailed to a tree that announced it. So when I reached the next ledge and saw nothing, I kept going, and soon met a hiker coming from the south. He said, with a light accent, that it was all downhill behind him. And so we went back to the ledge, declared it Panther, and decided the sign had become firewood at the illegal campsite nearby. 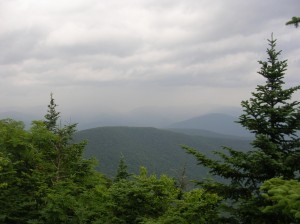 The hiker was Orjan, visiting the Catskills from Sweden for a friend’s wedding. He stayed on the summit just long enough for us to explain ourselves to each other, and to take a handful of photos with a very serious-looking camera. Then he went back south, leaving me to watch the sky shift to gray, and rain close across the mountains away to the northeast. The briefest of showers spattered Panther, and for an unlikely moment I felt a little cold. A longer shower arrived, and I stood right in it, listening to the thwack of its drops on the trees and my poncho. Coming down from the summit, the rocks were slick now, and I had to concentrate on my footing. Maybe it tired me out, because I found a slab of rock and lay down. Feeling the restored sun on my face and hearing the wind bend the branches, I closed my eyes and was thankful for marginal places.